Keith Walton (a member of this Parish) writes: 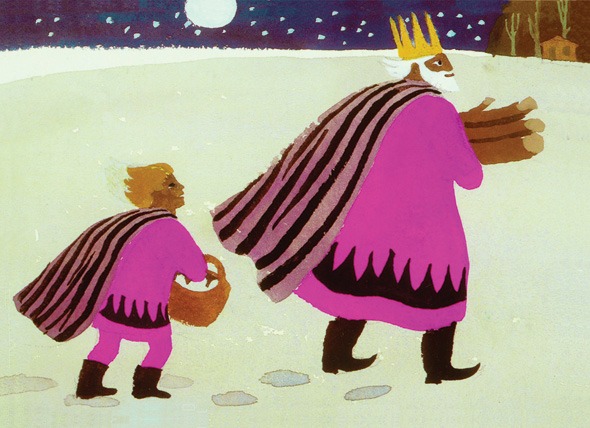 I have been intrigued by the story which unfolds in the Christmas Carol – Good King Wenceslas.  The action takes place on St Stephen’s Day (Dec 26) when the King sees a peasant trudging through the snow collecting wood for his fire, and resolves to help him.  Accompanied by his page the King sets out into the wintry weather, which starts to take a toll on his servant.  However by walking in the king’s footprints the page is restored to warmth and good health.

I wondered how that story might be retold in today’s world, and so the Good King Wenceslas stories were born, one a year as part of our Christmas Meeting Point service.  They are intended to be humorous, and show the King coming to terms with the various  elements of  modern living: climate change, social media, information leaks, advertising slogans, Brexit, contactless cards, and virtual reality glasses.  The convention has grown that each story begins with the opening words of the carol, and ends with a revised version of the carol’s last verse.  Elements of the carol also appear from time to time in each story. For those unfamiliar with the carol, you can click here.

You might also like to know that Good King Wenceslas (a Latinised version of Vaclav) is a historical figure.  Born to the ruling family in Prague in 907 he became Duke of Bohemia in 921 until he was assassinated in 935.  His death and the subsequent stories of his goodness enabled him to be declared  both a King (although Bohemia was a duchy not a monarchy) and a Saint.  He has become the patron Saint of the Czech Republic where his Saint’s day (Sept 28) is a national holiday.

The Christmas Carol Good King Wenceslas celebrates one of his saintly actions which takes place on St Stephen’s day (Dec 26). It was written in 1853 by John Mason Neale, but the tune comes from a much earlier period – a 13th century spring carol.

Click on the individual stories (and the text of the carol) below.

Good King Wenceslas and the leak