Situated within the old ‘British quarter’ of the city that lay behind Exeter’s medieval Guildhall, the church of St Pancras stands possibly on one of the most ancient Christian sites in Britain. The dedication is an early one: perhaps to the teenage boy martyr killed by the Roman emperor Diocletian in 304, or another saint of the same name, an earlier missionary bishop martyred in Sicily. It was apparently a popular dedication in the West Country; there are another five in Devon, of which the best known is that at Widecombe-in-the-Moor.

History of the church 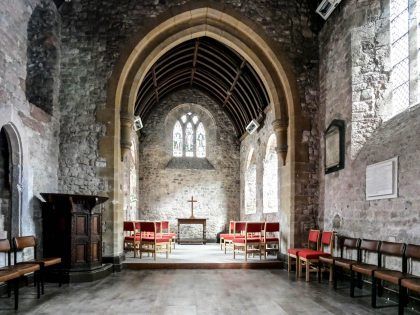 The present building, merely 46 feet long by 16 feet wide, roughly built of the coarse local Heavitree stone, is first recorded in AD 1191, from which period dates the font. But its proportions compare closely with the well-known Saxon church at Escomb, Co. Durham, and when the chancel was rebuilt in the 19th century there was found what seems to have been a Saxon doorway in the south wall. Pieces of rubble from the fabric of a later medieval building were found at the same time – three carved fragments of which were set high in the south wall of the chancel.

Essentially we are looking at a medieval building…

Although simple, the fabric of the building indicates a lengthy history; the chancel is on a separate axis from that of the nave, suggesting different dates of construction. What we see now largely belongs to the 13th century, e.g. the simple lancet windows in the chancel, and in the wall to the south the scalloped piscina where the holy vessels were washed. The small rectangular recess above may have been where they were stored. The square-headed windows in the nave were probably inserted in the 16th century. The late medieval wagon- or cradle-roof is of a type common in Devon.

The church has no tower, but there is a small bell-turret at the west end. The existing bell is medieval, made by the Exeter bell-founder Robert Newton in the middle of the 15th century. It bears the inscription: Quamvis sum parva tamen audior ampla per arva, ‘I may be small, nevertheless I am heard over a wide distance!’

The chancel arch was reconstructed in the 19th century by J.L. Pearson (architect of Truro Cathedral). And the east window was provided with new tracery, and stained glass depicting the Crucifixion of Jesus with, to the left, the missionary martyr Saint Pancras (see above) and right, the Devonian missionary martyr Wynfrith (renamed Saint Boniface), born at Crediton in 680 and killed in Holland in 754.

In the north wall can be seen the entrance to a stone staircase which originally led to the top of a wooden screen dividing nave from chancel. This was apparently taken down about 1800. At the west end of the nave a wooden gallery projected 10 feet from the wall similar to that still to be seen in St Martin’s. Screen and gallery together must have made the interior very crowded indeed, and during the early 19th century the seating was placed so close together that it was said to be impossible to kneel. This state of affairs was not improved when in 1906 the nearby church of All Hallows was demolished and its furnishings transferred to St Pancras’. Of these, the most interesting remain: the fine Jacobean pulpit and several memorial tablets, those near the door to Loveday Bellet and Bridget Hele reminding us what a scourge smallpox was in earlier times.

Since the Reformation St Pancras’ has intermittently been closed, disused and dilapidated for long periods. There is no churchyard (the numerous burials taking place within its walls) and it was for long jostled by houses, shops and stables built up against it. The blocked west window shows where a tenement stood until the 1930s. On the outside the south-eastern corner of the chancel was chamfered to allow waggons and other traffic of a busy medieval city to pass more closely.

St Pancras’ has never had a parsonage, glebe or tithes, and over the years has had to be joined with various neighbouring parishes. It is curious that this tiny chapel should have survived when so many other of Exeter’s twenty-eight medieval churches have disappeared. But parishioners have constantly argued that it was valuable as an occasional chapel and meeting-place; and this view was triumphantly vindicated during World War II when it proved a haven for worshippers from neighbouring churches damaged or destroyed in the blitz. Now, cleaned and restored, cleared of its Victorian pews, it is one of the buildings of the Parish of Central Exeter. The Guildhall Shopping Precinct within which the church now stands, crowded about with the business of the city in the way it always has been, ensures its continuing purpose. Holy Communion is celebrated regularly and, opened each weekday; it provides an opportunity for peace and quiet for those who come to this part of the city in the course of their daily round.

Looking around the church

2 WALL HANGING: Made by a recent member of the congregation.

3 STAIRCASE: This originally led up to the top of the medieval rood screen, an open, carved wooden screen dividing the nave from the chancel. On top of this screen would have been a figure of Christ on the Cross (the Rood), perhaps flanked by figures of the Virgin Mary and St John the Evangelist.

4 PULPIT: (Preaching desk) 16th century, with foliage around rectangular panels, brought from the demolished church of All Hallows.

CHANCEL WINDOWS: 13th century lancet. The 19th-century east window, with Y tracery, shows the Crucifixion, St Pancras and St Boniface.
St Boniface b. 680 in Crediton, was martyred in Holland in 754.

6 PISCINA: 13th-century scalloped recess where the holy vessels were washed. The small rectangular recess above may have been where the vessels were stored.

8 MEMORIALS: All from the demolished church of All Hallows. The best one, with a border of flowers, fruit and skulls, is to I Loveday Bellett, 1711, one of the many smallpox victims of this period.

OUTSIDE
The small bell turret houses a medieval bell made by the Exeter bell-founder Robert Norton in mid-15th century.