St Petrock’s is the largest and most central of Exeter’s surviving ancient church buildings.

A church for the rich and poor

It lies close to the crossroads at the very heart of the medieval city, spanning the space between High Street and Cathedral Close.

Although the original parish consisted of little more than two acres, it lay in the most prosperous commercial and residential part of the old town and attracted a wealthy congregation, including important merchants, city officials, members of parliament and the like, and was famous for its charitable concern for the city poor.

A church that was once hard to find

Like so many of these small urban churches, St Petrock’s was formerly scarcely seen, being hemmed in on every side by houses and shops. The High Street widening of 1905 and the blitz of 1942 served to open up the vista a little, although east and west ends of the building are still partially embedded in commercial premises.

St Petrock’s is possibly as ancient a church foundation as any in the city. However, documentary evidence begins only with the 12th century. Saint Petrock, to whom the building is dedicated, was a 6th-century missionary from south Wales who worked extensively along the Atlantic seaboard but was remembered particularly in Cornwall, where his most important foundation was at Bodmin. Probably an interest in this saint was introduced to Exeter ̵ no doubt with relics ̵ when Bodmin came into the possession of Exeter diocese shortly before the Norman Conquest.

Development of the church building

The early medieval church was built in the northwest corner of the cathedral precinct, which was used until the 17th-century as the town cemetery.  Aligned west to east along the High Street, this seems to have been a straightforward building consisting of merely western tower, nave and chancel (these are the parts that are open today).

When the cathedral precinct was finally enclosed for reasons of safety in 1286, the fact that doors of some kind existed on both sides of St Petrock’s meant that passage through the church formed one of the few recognized means of access to the Cathedral Close so that the church acted rather like a postern-gate.

Because the church was blocked by buildings all round except on the cemetery side to the south, this meant that any future development of the building would be determined by the problems created by its cramped site.  Effectively you could only extend the church in one direction – the south side.  This resulted in an interior which Pevsner describes as ‘among the most confusing of any church in the whole of England’. Its history of development is certainly complex, but basically it is the story of a series of medieval and later enlargements towards the Cathedral Close side.

Growing congregations during the 15th- and 16th-centuries required demolition of the original south wall to allow provision of a further three aisles.  The wall is now reinstated and divides the present church use from the Homeless Centre which occupies the remainder of the building.

The great Reformation Age was a period of singular importance for St Petrock’s, and it came into particular prominence during the Commonwealth (1649-1660) as one of the four

remaining parish churches of Exeter, under the ministry of the lively and influential preacher Mark Downe. The Revd Downe was evicted as a non-conformist after the Restoration of 1660, but lived on a further twenty years to be buried beneath the floor of the church he served ̵ his memorial stone now in the floor of the chancel.

The royal coat of arms is a rare example from the reign of William and Mary. From this period also date some of the impressive wall-memorials ̵ most striking perhaps that bearing the sombre portrait-busts of William Hooper, a merchant and former churchwarden, who died in 1682, and of his wife Mary, who died twenty-four years earlier ̵ bearing their tenth child. They wear the costume of puritan bourgeoisie in the time of the Commonwealth, although William also sports the full-bottomed curled black wig that became fashionable with the Restoration.

Nearby, two contemporary monuments, flanked by classical Corinthian columns, display armorial bearings and Latin inscriptions commending the civic virtues of members of the Worth and Mayne families. The High Street side of the building was evidently clear of obstructions for a period at this time, since two new windows seem to have been provided. Subsequently blocked, these are now visible only from the exterior.

Victorian changes include re-orientating the church

Two further modifications took place in the 19th century. First in the 1820s a radical remodelling by the architect Hedgeland extended the southern-most aisle and provided distinctive roofing with clerestory and skylight. The stained glass was supplied soon afterwards by Beer of Exeter.

Because the building was as wide as it was long, this made it difficult for the congregation to see or hear those leading worship.  This was solved by building a new chancel designed by Hayward on the south side with a fine five-light window onto the Cathedral Close.  The choir, organ and vestry were also moved to the southern end and old choir gallery removed.  New pews were arranged to face the new chancel.  It this way the whole orientation of the church was changed.

In the 1970s after considerable debate about the future of the building as a whole, the decision was taken to physically divide the church to create a smaller area for  church use with the remainder being leased to the St Petrock’s (Exeter) Ltd, a charity that provides advice and support for homeless people in the St Petrock’s Centre.  (See www.stpetrocks.org.uk)

The Centre contains most of this Victorian development, some of which may be glimpsed through the glass screen which divides the church. Much of the 19th-century development is masked by mezzanine flooring and other wooden structures (designed by Caroe, architects). Those interested in the history of the building may visit this part of the church but by prior arrangement only. The decoration and furnishings of Hayward’s chancel are still more or less pristine, with locally important glass by Drake of Exeter. The result was an unusually attractive interior with an intriguing disposition of space and light, determined by an irregular ground-plan- no one wall quite at right-angles with another- the nave well-lit by the raised octagonal skylight, with slender late-medieval style pillars grouped all around.

2017 and a new renovation for St Petrock 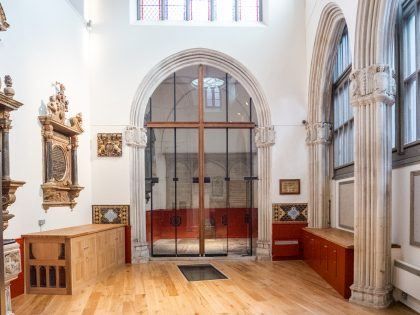 2017 has seen some major changes to the church area.  The floor has been levelled, underfloor residual heating installed and topped with wooden boards.  The dark gothic-style porch has been removed and replaced by a modern glass one.  New storage space has been provided including some made from the old pews. A sink area enables hot drinks to be served.  All the monuments have been cleaned and the walls and ceilings repainted.  Hanging from the roof-light in the chancel is a metal crown of thorns constructed by Exeter sculptor Matt Dingle who has also made the circular folding communion table.   One of the sadder necessities of twenty-first century life is the need to install CCTV cameras for security purposes.

The tower contains a peal of six early bells ranging in date from the 15th to 18th centuries. It is one of the lightest peal of six in the country, and as such of particular interest to visiting campanologists.  The church is also the home to a large bell from Ashburton Parish Church.

A number of the early memorial ledger-stones with which the interior was formerly paved, were re-sited beneath the tower. Above the wooden panelling along the walls of the Victorian nave was set a line of thirty-two uniform polychrome ceramic memorials.