One of the ancient churches in the Parish of Central Exeter

Like several of Exeter’s medieval churches, St Olave’s was founded in late Anglo-Saxon times. Its dedication is to the Norwegian St Olaf, whose name has become anglicized as Olave.

Olaf Haraldson was a Viking war-lord, reputed according to the sagas to have helped English king Ethelred the Unready to regain his throne in 1014 having been forced to flee the country after an invasion by the Danish king Cnut, whom we know better as Canute. Olaf then left England for Normandy where he appears to have accepted the Christian faith and was baptized in Rouen cathedral. He returned to Norway in 1015 with the aim of establishing himself as king, and making the country Christian. However brutal enforcement of his rule and religion did not endear him to his people, and in 1028 he was forced into exile following an invasion by Canute, King of England and Denmark. Olaf died in battle in 1030 trying to regain his throne.

Olaf was buried at Nidaros (modern Trondheim), and shortly after his death stories began to circulate about miracles being performed in his name. According to the sagas, Bishop Grimkell who was Olaf’s great friend and adviser (and English!) decided to investigate….

‘The bishop with some men went to the place where the king’s body was buried, and had the place dug. On Aug. 3, A.D. 1031, twelve months and five days after King Olaf’s death, his holy remains were dug up, and the coffin had raised itself almost entirely to the surface of the earth; and the coffin appeared quite new, as if it had but lately been made. When the coffin was opened there was a delightful and fresh smell. Thereupon the bishop uncovered the king’s face, and his appearance was in no respect altered, and his cheeks were as red as if he had but just fallen asleep. The men who had seen King Olaf when he fell remarked, also, that his hair and nails had grown as much as if he had lived on the earth all the time that had passed since his fall.

Thereupon King Swein, and all the chiefs who were at the place, went out to see King Olaf’s body. Then the bishop had live coals put into a pan, blessed it, cast incense upon it, cut off the king’s hair and beard and placed them on the fire. When all the incense was burnt the bishop took the hair out of the fire, and showed the king and the other chiefs that it was not consumed.

It was determined that King Olaf should be considered a man truly holy; whereupon his body was transported into St Clement’s church, and a place was prepared for it near the high altar. The coffin was covered with costly cloth, and stood under a gold embroidered tent. Many kinds of miracles were soon wrought by King Olaf’s holy remains.’

Olaf was canonised as a saint by Pope Alexander III in 1164. (He was also the Pope who canonised Edward the Confessor in 1161 and Thomas Becket in 1173.) The first written history of Norway, composed probably between 1170 and 1220, calls Olaf ‘Rex Perpetuus Norvegiae’ – Norway’s perpetual king.

Why did an unpopular king become a saint?

Given that Olaf had been thrown out of Norway by his subjects, anyone could be forgiven for wondering exactly how and why the negative aspects of his reign were so quickly forgotten. Perhaps the answer is a mixture of reasons, including Bishop Grimkells determination to honour and continue the memory of his friend, and also that having left, his replacement, Swein, a son of King Canute, was considered to be even worse! In addition if Christianity was to win the hearts and minds of the Norwegian people, a local saint who at least displayed accepted Viking traits of courage and skill in battle, would be more effective than someone from a different time and place.

It is understandable that Olaf became a saint in Scandinavia, but why did he have churches dedicated to him not just here in Exeter, but elsewhere in England.?

It seems likely that St Olave’s church originated as a house-chapel belonging to Gytha, countess of Wessex, sister-in-law to King Canute and mother of Harold, the last Anglo-Saxon king of England. She owned a considerable part of the pre-Conquest parish, and endowed its church with sizeable estates. It also seems that Canute adopted a policy of courting the local saints of the countries he had conquered, So if the king was favourably disposed towards Olaf as a saint, it would also give a positive message to his family members and also to the many Viking settlers within the eastern side of England. It may be fanciful, but since Olaf of noble birth had been able to become king, perhaps Gytha thought prayers to him for her son Harold to become king might be appropriate. 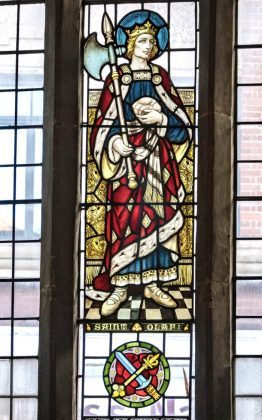 Later medieval tradition records that when William the Conqueror laid siege to Exeter in 1068, the priest of St Olave’s enabled Gytha to escape. Subsequently Gytha’s confiscated Exeter properties, including the church, were handed over to French monks who used the income to found St Nicholas’ priory, the remains of which lie in the alley behind the church, and with which St Olave’s remained closely associated throughout medieval times.

Of Gytha’s church nothing survives, except perhaps the small square tower, later built into the body of the church, but clearly visible from the street outside. Its position, standing within the sanctuary, is very unusual and possibly unique. The delicately carved base and capital of a small Romanesque column, found during restoration can be found lodged in the staircase leading to the top of the (now missing) rood¬ screen.

Towards the end of the fourteenth century the church was largely rebuilt, with slender octagonal piers; an aisle was added to the north side, stretching the length of the building and providing space for an additional altar where the organ now stands. Of decorative details then provided there remains only a sadly-mutilated sculpture depicting the Scourging of Christ before King Herod, probably originally part of an altar-panel, but now cemented into the wall within the tower-space. An arch was cut through the tower wall to provide an opening into the chancel, and a ‘squint’ piercing its north¬east angle so that an attendant could see the altar and ring the bell at certain points in the service. The single medieval bell hanging in the tower is inscribed in Latin: Voce mea viva depello cuncta nociva, i.e. ‘By my lively voice I disperse all that is harmful’.

Further large-scale modifications took place in the fifteenth century, when an outer north aisle was added – its short length probably determined by already existing buildings; matching windows were inserted all round, and a new doorway provided adjacent to the tower – now blocked but visible from the street outside (occupied by a war ¬memorial). The original timber wagon-roof, the lower struts of which can just be seen resting on corbels projecting high up on the north face of the tower, is hidden by plaster ceiling-panels.

Declared redundant during the Commonwealth period, St Olave’s was employed for a time as a parish school-room and later, between 1635 and 1758, provided a place of worship for French Protestant Huguenot refugees, some of whose names can be found among the numerous memorial floor-slabs. Thereafter St Olave’s served for a time as a military chapel for regiments quartered in Exeter.

More alterations were made in the earlier nineteenth century. The south wall was completely dismantled and rebuilt a few feet further south, abutting the street and flush with the tower. Additional seating was provided in a wooden gallery, part of which remains above the porch. At this time the royal arms of William III, now hanging on the west wall, formed the centre-piece of the altar, flanked by panels painted with the Lord’s Prayer and Ten Commandments. In later Victorian times St Olave’s came under the influence of the High Church revival. At this time it was refurnished: new benches made out of the old box-pews, the present font and pulpit provided, and a fine iron screen added on the north side of the sanctuary. The wooden sanctuary-screen and the altar ¬triptych belong to the early 1900s.

St Olave’s became part of the Parish of Central Exeter in 1971. It is still used regularly for worship by the Parish and also by the Romanian Orthodox Church.