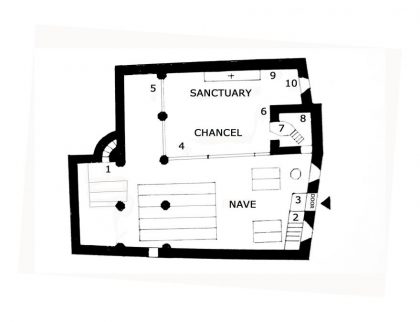 The pillars are slender and octagonal from the 14th century.

The seating dates from 1874 and made through recycling the original box pews.

Mosaics: Around the walls Stations of the Cross by Jill Christie, 1990s. The panels depict the incidents before Jesus’ crucifixion on the first Good Friday 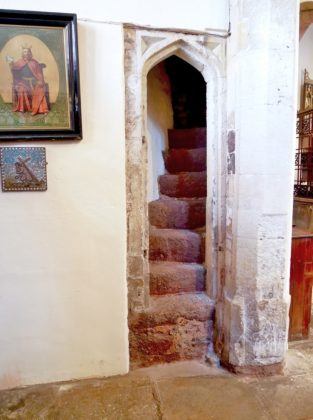 This originally led up to the top of the medieval rood screen, an open carved wooden screen dividing the nave from the chancel. On top of this screen there would have been a figure of Christ on the Cross (the Rood), perhaps flanked by figures of the Virgin Mary and St John the Evangelist

Over the entrance, the remains of a 19th century wooden gallery (which for safety reasons is not accessible to the  public)

The screen that divides the Nave from the Chancel was erected in 1902 as a memorial to the wife of Revd John Ingle rector from 1867 to 1891.  On the top of the screen is the crucified Christ and to the left the Virgin Mary and to the right, St John.

The ironwork screen on the left is unusual and particularly fine.

This is probably the oldest surviving part of the early medieval church. It stands within the chancel, which is unusual and is the result of the Fore St side wall of the church being moved outward in 1814,

This damaged 14th-century panel depicts the Scourging of Christ before King Herod.  This panel must have been re-sited here at some period of rebuilding, and was probably part of an older reredos near where the organ now stands.  It is rather hard to find, being hidden round the back of the pulpit.

The tryptich of three panels behind the altar form the reredos.
This was started in 1902, but may not have been completed until 1919.
At the bottom, the Archangel Gabriel appears to Mary to announce she will bear a son – Jesus.

Mary dominates the central part holding the Christ child in her arms.   On the topmost part is St Olaf as the warrior king of Norway, battle-axe in hand; on the right of Olaf is St Boniface, the great missionary to the German people who was born in Crediton and educated in Exeter.  Under Boniface is St Nicholas, whose priory lies close to the church. On the left side at the top is King Edward the Confessor, the son in law of Gytha, the donor of the church, and under him St Petrock,who evangelised the West Country and is commemorated in his own church which is also part of this parish.

The stained glass depicts St Olave as King of Norway.  The window was a gift from the parishioners in 1875.

Christ and the Woman of Samaria 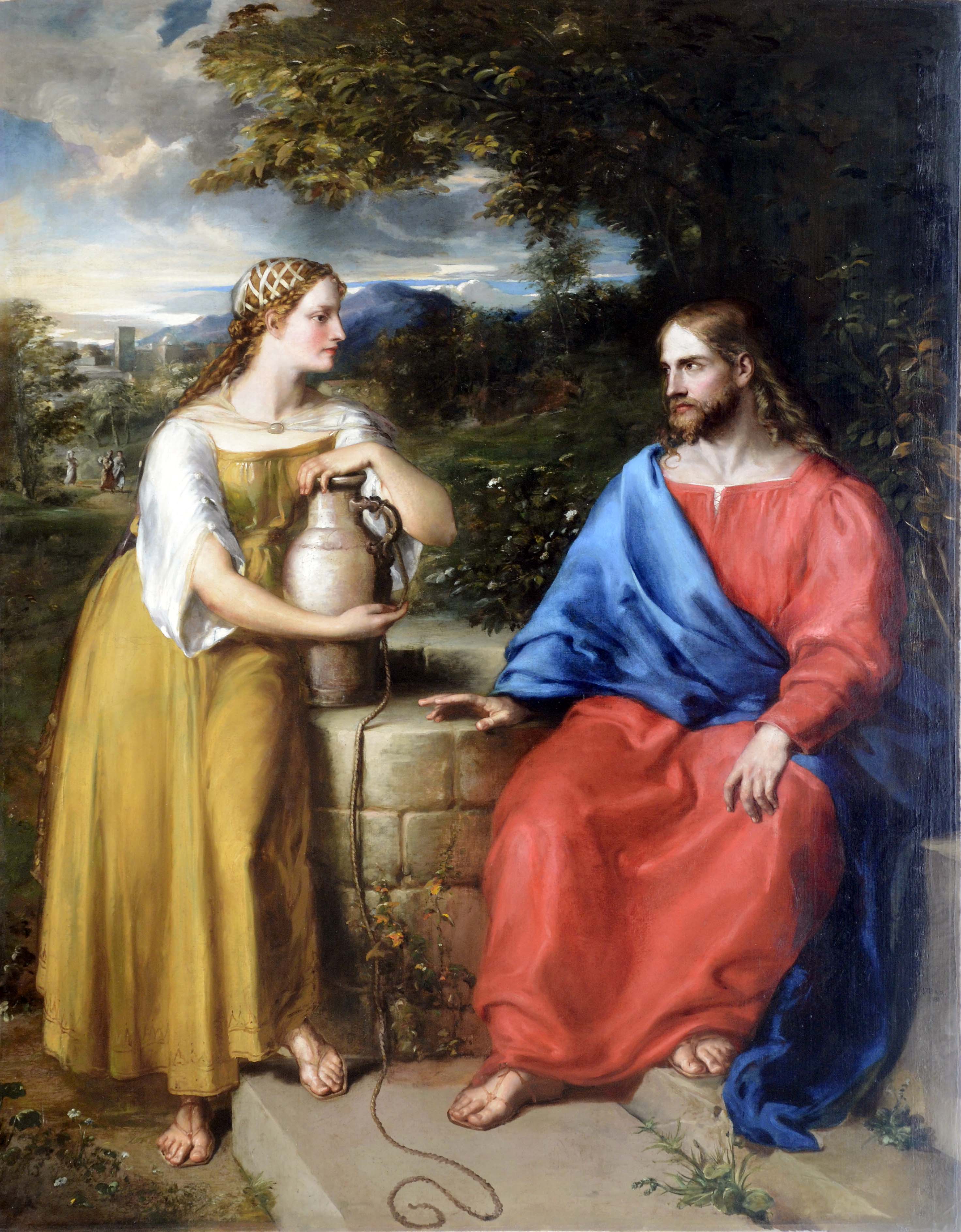 ‘Christ and the Woman of Samaria’ by Isaac Faulkner Bird.  Bird was an Exeter artist living from 1803-1884.  This painting was probably created in the 1870’s.  It was donated to St Stephen’s church, Exeter in 1896, and used to hang on the east wall behind the communion table.

The re-ordering of St Stephen’s in the 1970’s changed the internal space at the east end of the church and the painting was rehung on a different section of wall, but later taken down and stored to prevent water damage.

With the re-modelling of the church in 2011-12, there was no appropriate space for the painting and so it remained in storage.  In 2017 the opportunity was taken to clean, restore and relocate this painting and ‘The Mocking of Christ’  in St Olave’s church.

The incident depicted is only recorded in the Gospel of St John, 4: 4-26.  Jesus who was travelling between Judea and Galilee passed through Samaria and stopped at the town of Sychar.  The Samaritans were the descendants of the inhabitants of the Northern Kingdom of Israel who were not deported after the Assyrian conquest of the kingdom in 721/22 BCE.  They were often despised by the mainstream Jews and relationships could be fraught.  Jesus breaks several taboos in initiating a discussion with a local (unnamed) woman, who has come to a well to collect water, seemingly with no-one else present.

In this painting Bird shows Jesus and the woman very much as equals, and reminds us that Jesus did not see women in a negative light.  In John’s Gospel it is to this woman that Jesus first reveals himself to be the Messiah, (having not done so to the Jewish leader Nicodemus in John chapter 3).   The Samaritans were not looking for a political Messiah in the way that the mainstream Jews were, and so Jesus may well have considered that his revelation to her was less likely to be misunderstood.

The Mocking of Christ 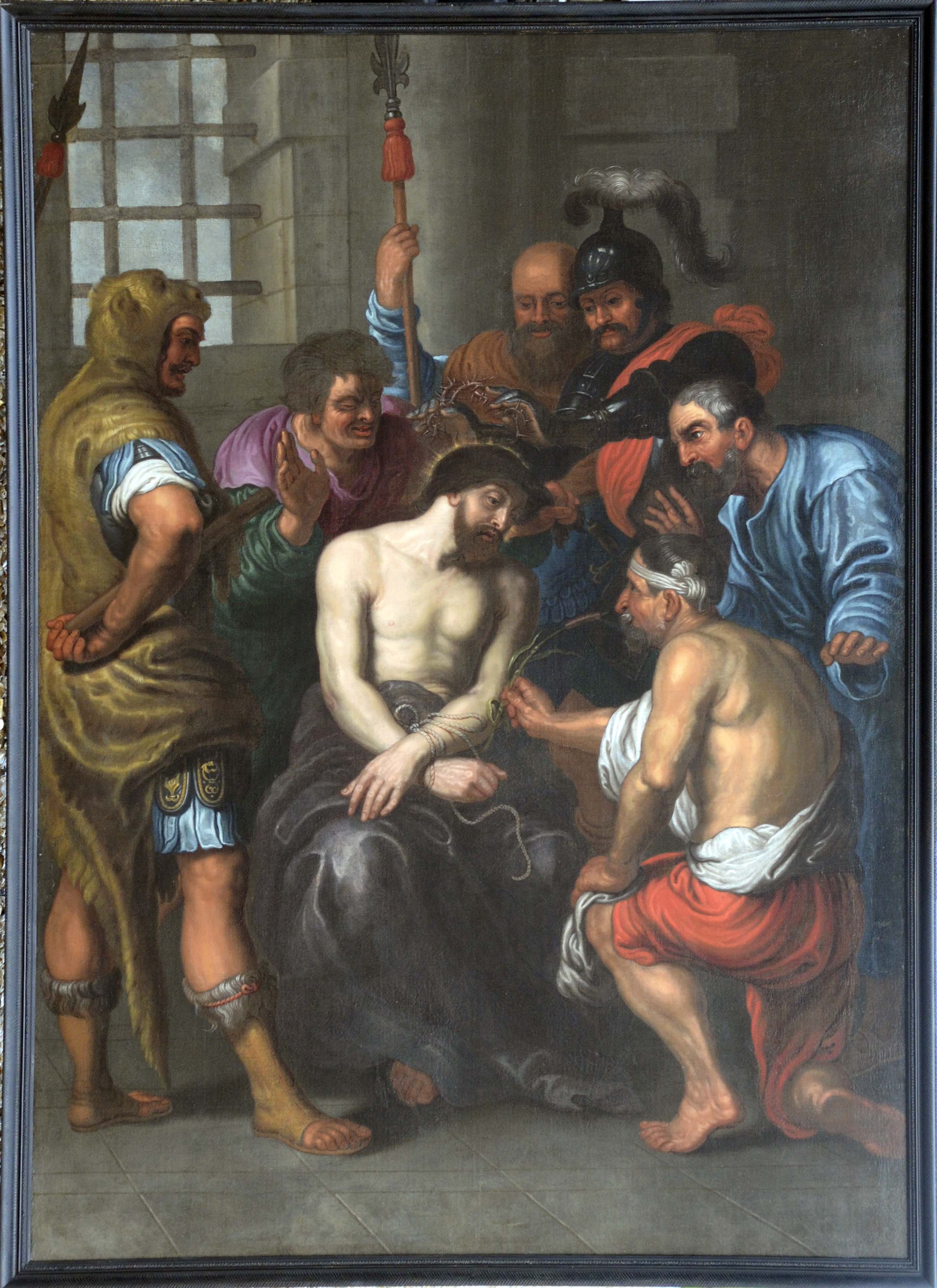 This painting has been attributed to Quentin Metsys (1456-1630) who was active in Antwerp.

According to Revd Dick Sledge who was a curate in St Stephen’s church in the 1960’s, the painting was originally given to St Stephen’s church in the 1930’s as a thank offering for the preservation of the church from an attempt by an adjoining business to buy the premises (a measure which apparently the Diocese encouraged).  The congregation had other views and the church was saved.

As with the Faulkner Bird painting, its location within the church became affected by changes to the building and it was stored, then cleaned, restored and rehung in St Olave’s in 2017.

All four Gospels record the incidents from Jesus’s arrest to his crucifixion, and mention or imply the treatment of Jesus by those guarding him.  The painter seems to be following Matthew’s gospel here: ‘Pilate’s soldiers…made a crown out of thorny branches and placed it on his head, and put a stick in his right hand; then they knelt before him and mocked him.’

Both paintings were cleaned and restored by Tim Everett of Everett Fine Art under the direction of Zelie Dale-Harris.  The cost of this work was met by the St Olave’s Parochial Trust.