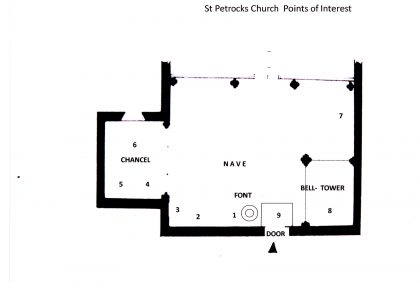 Inside the church, moving clockwise through the entrance door and new glass porch….

(the main body of the church) contains

(where Christians are baptized with water as a sign of becoming part of the church’s family).

On the walls, memorials to:

This is an imposing monuments that dominates the nave.

It is made out of limestone and Asburton marble. 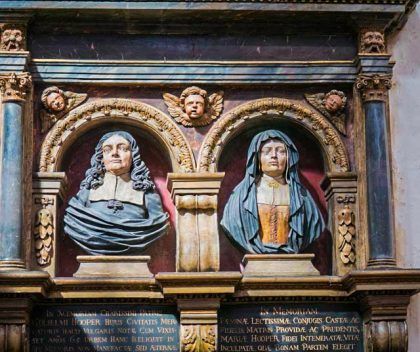 Mary died in 1658 and William in Jan 1682/3 – which seems a strange date perhaps!   Although England did not formally adopt the practice of the civil New Year starting on Jan 1 until 1752, it was already becoming common to regard Jan 1 as the start of the year rather than  Lady Day- which celebrates the Annunciation to the Virgin Mary that she would conceive and bear a son – Jesus.  Dates falling within that January to March period were shown as falling in either of those two years depending on your system of counting!. 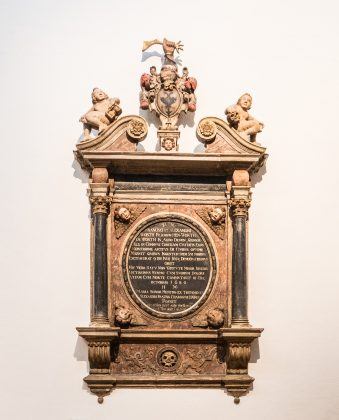 2  Francis and Alexandra Worth

Francis died in 1680 and his wife in 1686.  This is another monument in Ashburton stone. The crest on top of the coat of arms on the memorial is unusual representing a gloved hand holding an eagle’s leg.  Eagles symbolized strength and courage and tend to appear more in continental than British heraldry. Eagle’s wings, heads and legs were all used as heraldic devices.

3  The Royal Coat of Arms 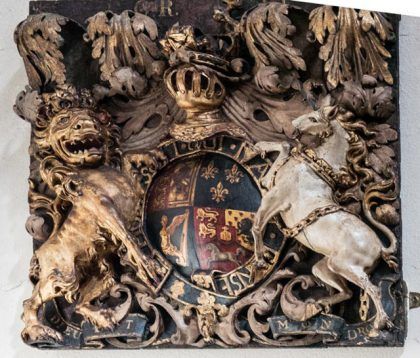 The monarch is head of the Church of England and to remind parishioners of royal authority the monarch’s coat of arms was placed in each church.  Our coat of arms here is of William lll and Mary ll who jointly ruled Great Britain from 1689 (following the ‘Glorious Revolution’ in which King James ll was ousted from the throne) and 1694 when Mary died.  William lived on, ruling alone until his death in 1702. William was Dutch and Mary was the daughter of James ll.

This part was also the original chancel (the part of the church where the priest led worship and separated from the worshipers by a screen).  It is now also the Chapel of Justice, Peace and Creation. 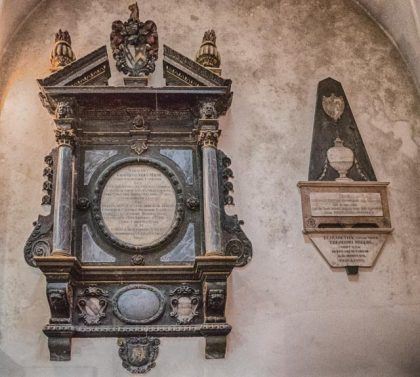 4 Memorial to John and Faith Mayne

This is again a very prominent memorial to the Maynes who died in 1679 and 1680.  Look carefully at the coat of arms on the top of the monument and also bottom left to see three hands in line -which is a pun on the name Mayne  as the French for a hand is ‘main’.  (Well, it was thought very clever at the time!)

5 Memorial to Theodore Sheere died 1782, a surgeon from Barnstaple and his wife who died in 1807. 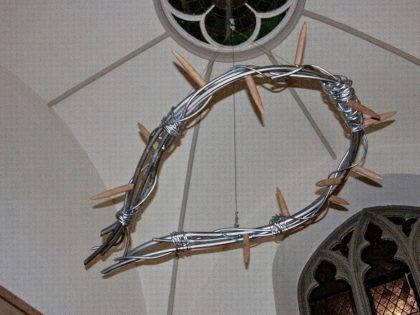 Hanging from the roof-light is the sculpture (2017) by Matt Dingle in metal and wood: the Crown of Thorns, remembering the crown of thorns placed on the head of Jesus as a mocking gesture before his crucifixion.

A circular wooden folding Communion Table by Matt Dingle (2017) is also in use.  Inscribed are the words: Justice: Peace: Creation

There are a number of ledger stones on the floor marking graves.  Details of these may be found here:

Returning to the main body of the church, the partition divides the present church building from the rest of the church which now forms a support centre for homeless people – St Petrock’s Centre.

At the west end there is 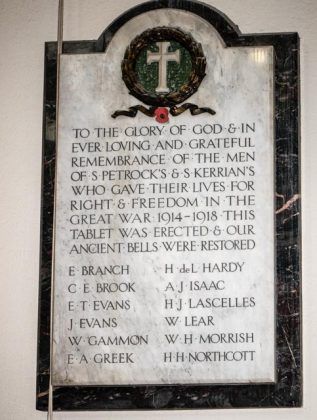 to twelve members from the parishes of St Petrock and St Kerrian who died in the Great War of 1914-1918.

St Kerrian’s was located on North St and was demolished in 1878 to aid road widening.  It’s location has now disappeared in the development of the Guildhall Shopping Centre.  The parish was amalgamated with St Petrocks.

Two monuments from St Kerrian’s were moved into St Petrock and these follow on our visit. 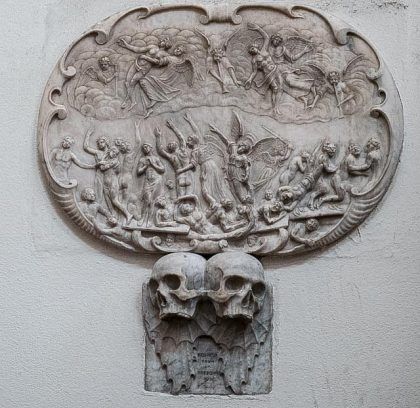 This marble plaque is by John Weston who was a gifted Exeter sculptor. He worked, probably in Cathedral Close, in the years c. 1715-35.A similar example is in the Royal Albert Memorial Museum in Exeter.

The final memorial is just above the entrance porch together with a plaque confirming is relocation from St Kerrian’s church.

9  Memorial to Jonathan and Elizabeth Ivie

Elizabeth died in 1698 and Jonathan in 1717.  It is possible that the last Judgement plaque was originally attached or closely associated with this monument. The two skulls at the base of the plaque are more akin in style to the Ivie monument than the plaque itself which has far more a Italian Renaissance quality.

including those of the tower arches are of unusual design said to derive from the Cathedral.

Click here to read more about the Great Bell and its two donors.

The peal of six bells, said to be the lightest in Devon, are now the centre of a healthy training centre for new ringers. Three bells are dated 1677, 1693 and 1742. The bells are inscribed: