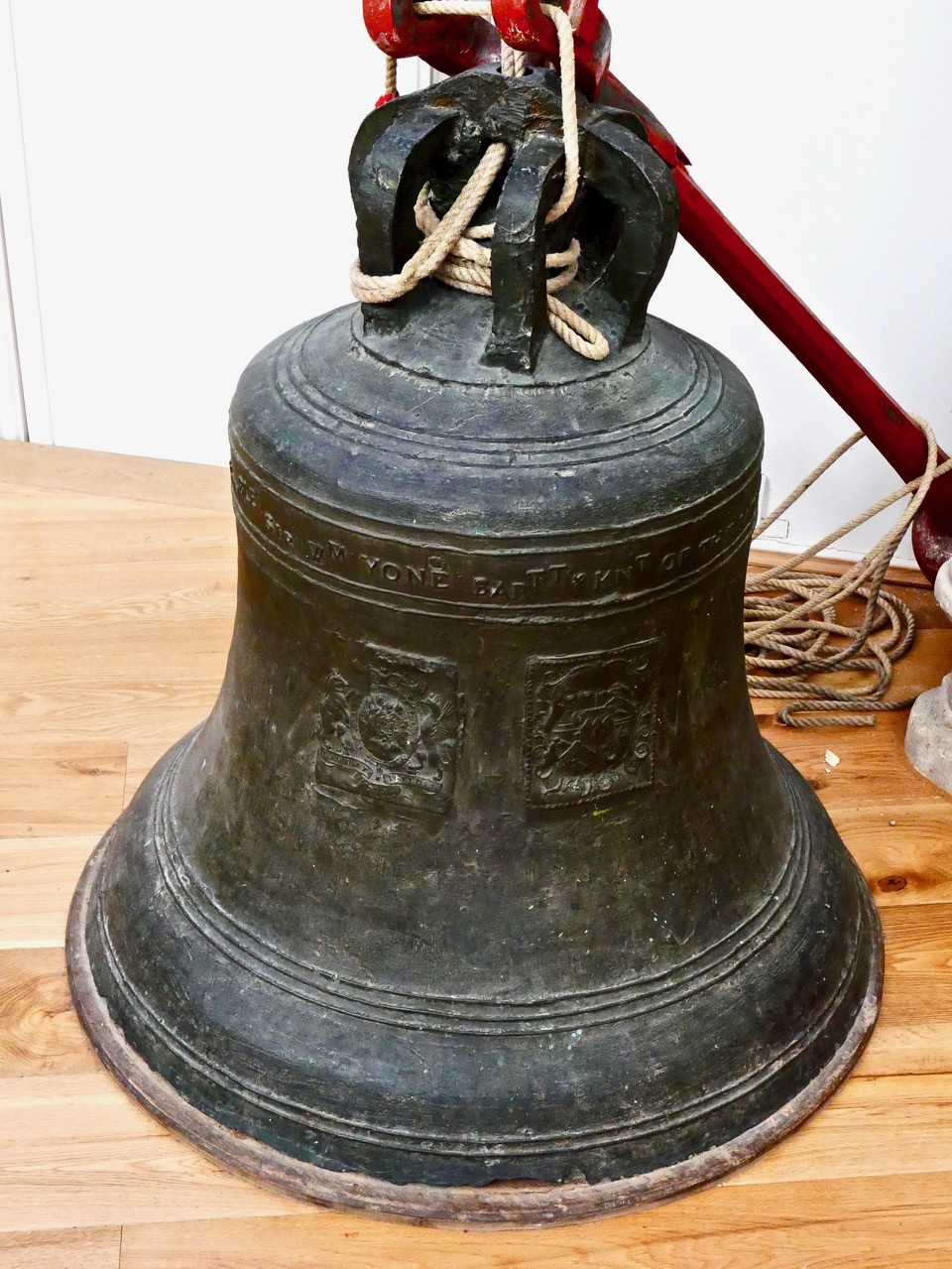 You cannot miss the large bell standing on the floor of the church.  It was originally the third of a peal of six bells that hung in Ashburton Parish Church, Devon. It is highly decorated with an inscription and two coats of arms.

The inscription reads:  The gift of the Right Honourable Sir William Yonge, Baronet and Knight of the Bath,  and of John Harris of Hayne Esquire. 1740.

The two coats of arms are those of the two donors.  Yonges has a Latin motto which in translation reads ‘Invite God’s praise’.

Yonge and Harris were the sitting MPs for Ashburton in 1740 when they donated this bell.  It might seem surprising that a small town on the edge of Dartmoor returned two members to Parliament, but it had once been an important stannary town.  A stannary town was where newly mined tin was weighed and checked for quality before being stamped and allowed to go forward for trading. Tin mining was an important feature of Dartmoor and in 1515 almost 40% of all Devon tin passed through Ashburton.  It therefore made a substantial contribution to the national exchequer.  By the early 1700s the tin trade had all but died out, but as no reform of Parliament had taken place, it continued to return two MPs.

William Yonge was the 4th Baronet and was born at the family estate of Escot near Ottery St Mary, East Devon.  Initially elected as MP for Honiton in East Devon in 1722, which seat he inherited from his father. He was a member of the Whig party and became a useful ally of the Prime Minister (although the title was not used at that time) Sir Robert Walpole, as Yonge would address the commons for as long as needed without making any particular point until Walpole arrived.. This did not make him popular with others, and King George II called him ‘stinking Yonge’.  By contrast in 1735 the king made Walpole a gift of a house in London: 10 Downing Street.

Yonge married Mary Heathcoat in 1716, divorcing her in 1724 to marry Anne Howard, co-heiress of the great Howard family.  She provided him with great wealth as well as two sons and six daughters!  Yonge was also a poet of some repute, and also wrote the lyrics for a comic opera successfully performed at Drury Lane in 1730.

He was one of the very many founding Governors of the Foundling Hospital, founded in 1739 by Thomas Coram as a place for the ‘education and maintenance of exposed and deserted children’. Most of the ‘great and the good’ had that role, and support of the charity became very fashionable.

Yonge was MP was Honiton then Tavistock before becoming MP for Ashburton.  He died at Escot in 1755.

There is less to tell about Ashburton’s other MP, John Harris.  Born at Hayne near Crediton, Devon, he became MP for Helston in Cornwall.  He is said to have voted as directed by the Government throughout his time as an MP without any concern about what the policy or issue actually was. In 1735 his wife inherited the estates of her brother in law, Roger Tuckfield which included an interest in the manor of Ashburton, so Harris arranged to become MP there, and remained so until his death in 1757.  He was a favourite of George II and became Paymaster of the Board of Works from 1738-1740 and Master of the Royal Household in 1741 until his death.

The bell was donated by Major John Joyner of Ashburton to the Bell-ringing Centre in 1990.